Athol Fugard is a South African director, actor, and writer of more than thirty plays.

He is best known for creating works confronting the racial segregation of apartheid, and today continues to pen insightful plays addressing modern inequality.

Fugard grew up in Port Elizabeth, South Africa raised by an Irish father and Afrikaner mother. He studied Philosophy and Social Anthropology at the University of Cape Town, but dropped out to hitchhike across Africa and work as a deck hand on a steamer ship.

In 1956, Fugard returned to Port Elizabeth and married actress Sheila Meiring, who nurtured his love of theatre. Together they founded The Circle Players, for which Fugard wrote his first play, Klaas and the Devil (1956). The pair then moved to Johannesburg, where Fugard took a job as a clerk at the Native Commissioner’s Court. The Court dealt with black persons charged with violations of the Pass Laws that restricted their movements in apartheid South Africa, and gave a European judge the option of applying Native or Common law. Fugard was appalled by the injustices he witnessed in the court.

While working as a stage manager for South Africa’s National Theatre Organization, Athol Fugard wrote Blood Knot (1961), the play that earned him international recognition. Fugard starred in the play alongside black actor Zakes Mokae, with whom Fugard would collaborate again on “Master Harold”…and the Boys (1982). As a result of the play’s criticism of apartheid, the South African government withdrew Fugard’s passport for four years. When he supported the Anti-Apartheid Movement’s boycott of segregated theatre audiences, the government further restricted his movements and the Secret Police began surveilling his theatre company.

The second theatre company founded by Fugard was the Serpent Players, a group of all-black actors, all of whom held regular jobs in addition to working on stage. Among the troupe’s members was John Kani, who would later receive an Olivier Award nomination for his performance in Fugard’s My Children My Africa! and later wrote his own play dealing with post-Apartheid South Africa, Nothing but the Truth (2002). The Serpent Players moved from venue to venue with minimal set, frequently performing Fugard’s plays in black townships, employing Brechtian theatrical principles of disillusion and social critique. The company’s name refers to their first venue, a former snake pit at a zoo. Fugard continued to write plays critiquing segregation, including The Coat (1966), and co-authored by John Kani and Winston Ntshona, Sizwe Bansi is Dead (1972). The latter was a play about staging Sophocles’ Antigone on Robben Island prison, where Nelson Mandela was held for twenty-seven years. Meanwhile, Fugard’s plays were produced to great acclaim in America and England. In 1972 Fugard was allowed to fly to England in order to direct his play Boesman and Lena (1969).

After a long struggle, in 1990 the apartheid system was abolished officially in South Africa (although it is widely considered to have ended in 1994 when Nelson Mandela became president in a democratic election). Athol Fugard directed his first movie in 1992, a film adaptation of The Road to Mecca (1984). Fugard’s later plays frequently were more personal than his earlier political works. “Master Harold”…and the Boys (1982) draws heavily on his childhood in Port Elizabeth, and The Captain’s Tiger: A Memoir for the Stage (1997) documents his time working on a ship in the 1950s. He also published a prose memoir, Cousins (1994).

Athol Fugard and his family now live in California, and he is an Adjunct Professor of Playwriting, Acting, and Directing at University of California San Diego. In 2010, The Fugard Theatre opened in Cape Town, debuting with Fugard’s play The Train Driver (2010).

Fugard remains one of the world’s most prolific and oft-produced playwrights. In 2011, Athol Fugard was awarded a Lifetime Achievement Tony Award. His richly human plays challenge his audience to confront and address social injustice.

“Are we never going to get it right?
Learn to dance like champions instead of always being just a bunch of beginners at it?”
-“Master Harold”…and the Boys (1982)

The first Athol Fugard play I saw was “Master Harold”…and the Boys. I was in high school, the same age as Harold, and the play haunted me. What was this world that felt in some ways so familiar – the pressures of school, the complex relationship of a child to his parent – and yet was so far away from my present day life? Later that year, I saw a production of Blood Knot. Though I was in liberal Northern California, I immediately recognized the social injustice and inequality being so eloquently represented onstage. I looked around my community and saw the story of the Blood Knot brothers. In this country, we were lucky to be untouched by apartheid, but we were not free from social inequalities of race, class, gender, and age.

Inspired by Fugard’s writing, I became obsessed with South Africa, wanting to learn as much as I could about this dry and foreign place where in my lifetime, discrimination was written into law. I remembered watching Nelson Mandela receive the Nobel Peace Prize. I rented the Up Series documentaries that followed black, white, Indian, Afrikaner, and colored children throughout their daily lives. The 1990s were an exciting time to be paying attention to South Africa, and I think we were all aware that we were witnessing something big: the end of apartheid was the beginning of freedom for a nation mired in deep sadness, poverty, and imbalance.

Born in 1932 in the Eastern Cape town of Middleburg, South Africa, Fugard started writing in the 1960s. His prolific history (in which he also acted in and directed many of his own works) includes over 30 plays, many film adaptations, and a special Tony Award for Lifetime Achievement in the Theater. Fugard’s writing still energizes me to grapple with issues of social justice: education, socioeconomics, gender, age, race – they’re all in there. But as an adult, it is also Fugard’s tremendous skills as a writer that draws me again and again to these texts. He takes tiny corners of South African life and, by shining light onto them, turns them into prisms that reflect the whole of the surrounding world out to his audience. Fugard’s work does not overtly presenting doctrine and diatribe. Instead it is theater of humanity, of relationships, of the heart. In a country as political as South Africa, Fugard has said, political commitment and comment is an automatic by-product of being a truthful storyteller. His work inspires conversation, deep examination of the questions he asks, and then, real change. He is, without question, one of the greatest writers of our time.

Though rainy Portland is on the opposite side of the earth from the deserts of South Africa, I know you will find, as I have, universal truths revealed in the specificity of Fugard’s words: poetic, blunt, honest, and inspiring.

Other Media:
Africa Past and Present Podcasts
via KBOO: Alan Wieder speaks about the part music played in the anti-apartheid struggle

My Children! My Africa!

It’s 1985, the height of the student uprising against the government’s oppressive apartheid system. Passionate teacher Mr. M inspires an unlikely pairing for an English competition: brilliant black student activist Thami and privileged, down to earth white Isabel from a neighboring school. Loyalty and friendship are put to the test when external forces prove stronger than the walls of the Karoo classroom and the students loudly cry: Is this education power or is it oppression?

My Children! My Africa! was the production for our inaugural Inside Out: Community and School Tour. 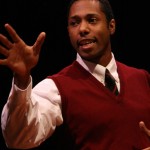 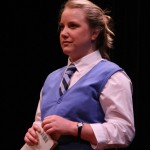 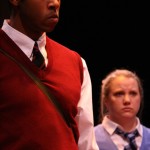 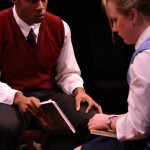 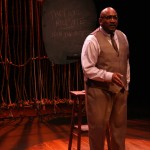 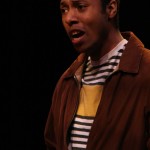 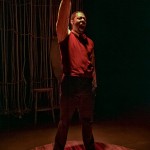 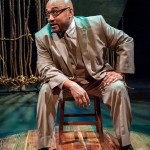 Brothers Zach and Morris live together in a one-room shack in Port Elizabeth’s black housing slum, unable to escape until enough money is saved from Zach’s job guarding the entrance of a Whites Only park from non-white children. As light-skinned Morris tries desperately to hold on to his only family, he inadvertently creates a chasm that might never close, forcing dark-skinned Zach to ask the most dangerous question: Is love only skin deep?

Athol Fugard originated the role of Morris onstage. Upon its premiere in Johannesburg in 1961, the two-character play was immediately closed and censored by the South African government for having an interracial cast, the first South African play to do so. It was the Off-Broadway production of Blood Knot that launched Fugard’s career as a playwright with American audiences. 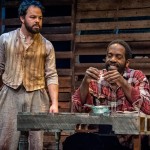 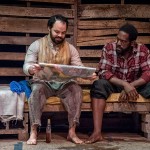 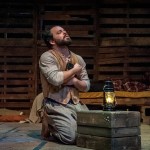 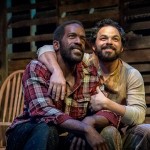 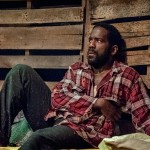 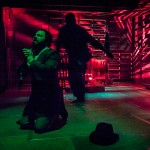 The Road to Mecca

Miss Helen, an eccentric widow and sculptor, lives alone in a small village in the Karoo desert. When Reverend Marius argues for moving her into an old age home for her own safety, Miss Helen questions whether to give up, give in, or go on. She summons the only person she trusts: Elsa, a young schoolteacher who loses her footing while taking aim at society’s treatment of the elderly and of those who do not conform. Birth, death, and what comes next are brought under examination as the artist courageously asks: What is true faith? 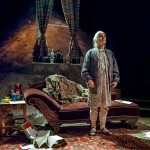 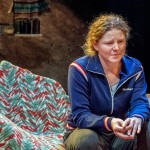 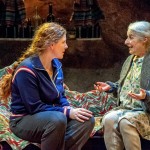 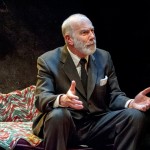 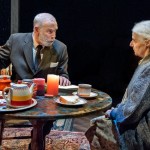 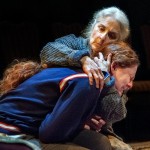 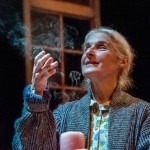 In Fugard’s semi-autobiographical work, white 17-year-old Hally comes of age in his mother’s small, run down Port Elizabeth teashop during the height of apartheid. On a quiet, rainy afternoon, Willie and Sam, black waiters closer to the boy than his own father, practice for an upcoming ballroom dance competition. While Hally works on his lessons, the three friends uncover the cruel power of language by revealing dark secrets and speaking words that cannot be unsaid. 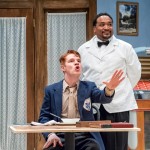 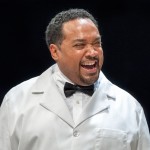 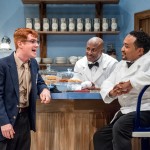 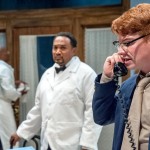 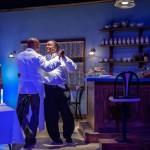 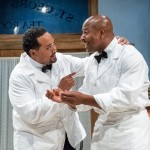