S2 E3 Come In and Be Seen feat. Anya Pearson 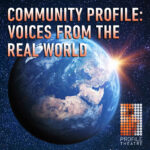 “Anya Pearson is one of the truly up-and-coming writers of the Portland literary scene. She’s a playwright, a novelist, a poet and a screenwriter. Her writing is intensely personal, intimate and soulful.”

Anya Pearson is an award-winning actress, playwright, poet, producer, activist, and teacher. She is a current Hodder Fellow at Princeton University’s Lewis Center for the Arts. Anya was the inaugural winner of the $10,000 Voice is a Muscle Grant from the Corporeal Voices Foundation run by best-selling author Lidia Yuknavitch, for her choreopoem, Made to Dance in Burning Buildings. Made to Dance in Burning Buildings was showcased at Joe’s Pub at The Public Theater and received its World Premiere at Shaking The Tree Theatre where Anya was the Playwright-in-Residence for the 2018-2019 season. Anya received the $10,000 Problem Play Commission to adapt Shakespeare’s Measure for Measure focused on mass incarceration and the other numerous failings of our criminal justice system. Her adaptation, The Measure of Innocence, was selected for the 2020 Kilroys List and won the 2020 Drammy Award for Best Original Script. The Measure of Innocence was a finalist for the Oregon Book Award – Drama. Anya was a finalist for the 2020 George A. and Eliza Gardner Howard Foundation Fellowship in Playwriting and the National Black Theatre’s 2019 I Am Soul Playwriting Residency. She is currently under commission at Portland Center Stage. Her reimagining of Agamemnon, The Killing Fields, was developed at Seven Devils New Play Foundry and is currently at the Great Plains Theatre Conference. Anya’s Three Love Songs, a short play about life during the pandemic, originally commissioned by Portland Center Stage as part of the Play At Home Initiative, was called a “masterpiece that emerged out of the wreckage of 2020” by Willamette Week in their 2020 best of theatre review. Three Love Songs has been performed all over the country including Wolly Mammoth Theatre’s Connectivity Initiative and will be housed at the Library of Congress in their Performing Arts Covid-19 Response Collection. Her spoken word protest poem “What it IS and What it ISN’T” was featured in a community conversation between Dr. Ibram X. Kendi and Portland City Commissioner Jo Ann Hardesty in October. Anya runs a multimedia production company called Urban Haiku whose mission is to produce groundbreaking work that transcends the traditional boundaries of performance while also serving as the catalyst for art and community action to combine for real social change. She is the Curator of Programming at Corporeal Writing where she also runs a BIPOC mentorship program and collective aimed at increasing accessibility and creative exchange between emerging BIPOC writers in all disciplines and established BIPOC writers who are successfully navigating the literary and entertainment industries. Anya is finishing her debut collection of poetry (“This is the After”), writing three pilots, launching a BIPOC-owned, PDX-based wearable art clothing label, and constantly plotting, planning, devising, creating, imagining, and revising visions of a better world. She is also a Guest Artist at Portland Center Stage where she teaches local high school students in their Visions & Voices program and adults in a BIPOC affinity space. As an actor, she is a member of Actors’ Equity Association and has appeared in numerous regional theatre productions, commercials, and independent films. She is also a member of Linestorm Playwrights, Couch Film Collective, and the Dramatists Guild. Anya is a graduate of the acting program at William Esper Studio in New York City and continues to train at AMAW in Los Angeles. She is a graduate of the writing program at Marylhurst University. Her best production is her 9-year-old daughter, Aidee, who can be seen most nights, trying to circumvent bedtime by asking deep philosophical questions like: “When are we going to see the world? When is my life going to truly begin?”