So why IS the door blue? 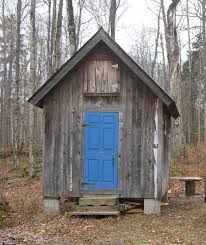 I don’t know about you, but I love history. Sit me down in front of The History Channel with some popcorn and several hours and suddenly you have a very happy person. Blue Door, the next magical installment of this Tanya Barfield season is chock full of interesting (and sometimes heart-wrenching) historical tid-bits. One of these is right in the title: Blue Door. Why Blue? Why Door? Let’s discuss.

Momma in Blue Door suggests, “Paint dis do’way blue. Keep d’ good spirits in. Keep d’ghost out.” According to the Gullah people (descendants of enslaved Africans from the lowcountry of Georgia and South Carolina) the color blue was thought to ward off ghosts or “haints” who, for whatever reason, had not moved onto the spirit world or who had malicious intent.

Okay, but still why blue? It is believed that haints can’t cross water, so African slaves would mix up a batch of “haint blue” milk paint and invoke the idea of water with the color blue. Though the practice of painting porches “haint blue” later became one of those, “It’s just what we do!” And we don’t know why kind of practices in the south, don’t be fooled! The Gullah people did it first.

The exact hue of haint blue is hard to pin down as it was generally produced from milk paint (a modern recipe for eco-friendly, indigo milk paint can be found here) a blend of lime, milk protein, pigment, and any kind of reliable binder such as eggs. As you can imagine with such a general ingredient as “pigment” the hue of the pigment and what it was derived from varied widely. Though, a lighter egg-shell blue is often associated with haint blue.

So, who were these people and how come it is such a common practice? The Gullah people were descended from African slaves who came from regions that were naturally sweltering, humid and where rice plantations were common. Their tolerance for malaria and yellow fever (diseases prone to cultivate in warm, humid weather) was relatively high so while the European settlers were dying from the disease, they were not. As a result, by the start of the 18th century the lowcountry region was primarily black. This isolation allowed African slaves more freedom to cultivate and perpetuate their traditions including (you guessed it) the blue door.