In Rehearsal with Orlando

Earlier this week I spent an afternoon sitting in on a rehearsal for Orlando. 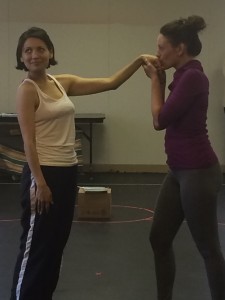 The afternoon started with a field trip to the stage where Orlando will be performing. It was many of the actors’ first time seeing the space and the partially constructed set. The stage manager encouraged the actors to explore the space, including the stage, the audience sitting areas, entrances and exits, and the backstage. After ten minutes of exploration, we headed back to the rehearsal studio where we spent the rest of the afternoon. The plan for the day was to do a run-through of the entire play, stopping as need to fix problematic areas. However, after five hours the cast had not even made it to intermission. Which was really interesting to watch. 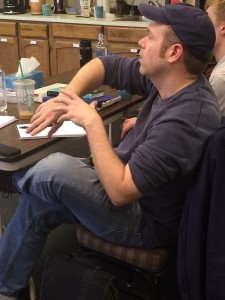 A few people asked me throughout the day if I was having fun (pointedly, like they were expecting me to be bored out of my mind), and I was. I found it fascinating to watch as a scene started with a run-through, was teased apart, worked out, put back together and then run-through again, infinitely improved over the first run-through. I got to watch the actors and director find places to add comedy, add character growth, add meaning to great text. I might watch a scene five times in a row and it became funnier and funnier every time because the actors were making new choices, or timing was adjusted. 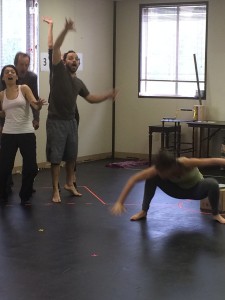 I got to see adults roll around on the floor, speak in falsetto voices, and generally act like children. Of course I was having fun. There were even cookies. Anyway, after an hour of rehearsal we were still finishing up work on the first scene of the play, which is a serious testament to the total amount of work put into rehearsing an entire play.  The stage manager then called for a ten minute break (giving us time to enjoy the cookies) and then we were back to move on to the next scene.  The afternoon continued like that. Actors would run through a scene, the director would call “Hold!” He would make comments, suggestions, directions. Actors asked questions. The stage manager made notes. Actors re-set and began the scene again with adjustments. Actors called “Line!” (or random expletives). I took pictures. Of course I was having fun.