From Intern to Actor: One Performer’s Journey with Profile

When I first found out about an open audition at Profile Theatre to be an acting intern, I was thrilled!  Then, when I found out that the roles for the interns were movement based, I panicked. Believing that I was possibly one of the most awkward and uninspiring “movers” anyone would ever have to witness, I immediately felt like I had no chance. I imagined that I would take my stiff and awkward self right out of my comfort zone and I would fail. Miserably. It seems crazy to me now to think about the fear that the word “movement” made me feel. Because of that fear, I decided I wasn't going to go to the audition. The only problem was that I kept hearing the voice of my acting professor in my head. She wanted her students to do this audition. It was a great opportunity for us. Honestly, the only reason I decided to go was because I could not bear to disappoint her.

When the audition began, I was shocked at how scary it… wasn't. I didn't feel judged. I didn't feel like a joke. I actually had….fun. Fun. I had fun moving my rugged and ungraceful body all over the room.  I saw my peers cutting loose and being fearless, and I forced myself to do the same. I walked out of that room smiling. I had triumphed over my fears that day and no matter the outcome, I had won. Then I was actually offered an internship. I was utterly shocked, completely overjoyed, and flooded with nervousness. But I accepted. And it was one of the best decisions I have ever made for myself. 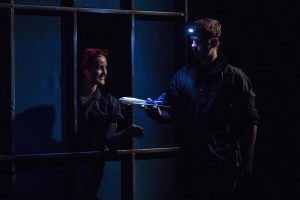 The rehearsal process for Dead Man's Cell Phone was an intensive training for me, that broke me down in order to build me back up. I had to use my body and brain together like I never did before. I had to teach my muscles to move in completely foreign ways. In every rehearsal, I felt myself changing.

I had discovered a new outlet for my creativity. By the time we started performing I was fully embracing my role as a mover. My athletic, strong, boyish body changed from something I was uncomfortable with to an instrument that I adored. What I didn't know at the time was that this training as a mover was making me a better actor. A true chameleon.

After Dead Man's Cell Phone, I was invited to audition for other Profile shows. I managed to get a call back for Passion Play. I don't think that I have ever been that nervous in my life. I didn't know anyone at the audition and sat quietly on my own, waiting for my turn. I was grateful to be given the chance to hold my own against much more seasoned actors. When I received an offer for the role of Violet/The Village Idiot, I could not believe it. I jumped off of my couch screaming, threw my arms around my friend and jumped up and down, tears welling up in my eyes. Everything I had gone through had gotten me to this point. Facing my fears, pushing myself outside of my comfort zone, taking every opportunity given to me no matter how scary it seemed. I went from acting intern to paid cast member in less than a year. I never thought that was possible for me. 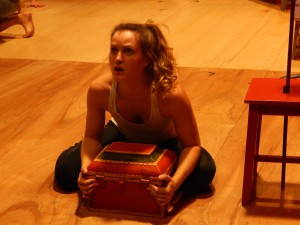 What's more, I feel like I gained a whole family in the process. Having moved to Portland from New Hampshire by myself, I can walk into that theatre and see comforting and familiar faces and it feels like home.

Now, I have the opportunity to work with a wonderful new group of people at Shaking The Tree Theatre. From the cast and crew, to the theatre space, to the whimsical, brilliant mind of director Samantha Van Der Merwe, the people that I get to work with are constantly inspiring me. All of my movement training is being utilized and I have never felt better about myself as an actor and about what I can bring to the table. I feel free and fearless. I am learning to push myself and I am having fun doing it. I never would have thought than an acting internship would teach me to love my body, give me a family, and ignite a fierce passion for my art. But it did just that.