A Man Made Machine 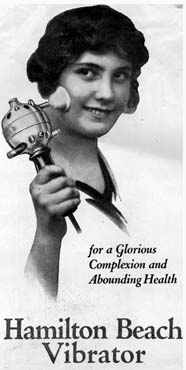 A popular early 20th century periodical, Heart’s International, advertised the latest home electrical appliance with the following slogan: “A Gift That Will Keep Her Young and Pretty: Star Home Electric Massage.” Thomas Edison’s channeling of the electrical current made way for the invention of small machines, such as the 1870s electric massager. This new-fangled device, considered as innovative as the vacuum cleaner, made young men’s sweethearts youthful and vibrant once again. By simply flipping an on-off switch and applying the gyrating head to the point of distress, physicians miraculously transformed their female patients into their finer selves. During the mid-nineteenth century, the very curious and popular male-driven invention called the vibrator treated common afflictions from headaches, to backaches, to hysteria – the malady associated with the weaker sex.

Around 300 BC, Hippocrates defined hysteria (from the Greek word “hystera” meaning “uterus”), as suffocation or madness of the womb. During medieval times, the renaissance period, and throughout the mid-twentieth-century, symptoms including anxiety, sleeplessness, nervousness, sensations of heaviness in the abdomen and lower pelvic region, and vaginal lubrication led physicians to the diagnosis of hysteria. Although “the disease” concerned the female sex organs, the associations with pleasure, eroticism, and physical love (or lack thereof), remained naively absent from the conversation. As Rachel Maines notes in The Technology of the Orgasm, men drew no association between women’s possible sexual dissatisfaction in their lives and hysteria. Paradoxically, a 1910 study by Havelock Ellis found that half of all American women were not sexually excitable, primarily because Ellis reasoned they lacked the sexual drive of men. Yet again, society blamed women for their apparent frustration and “melancholy.” Furthermore, men blamed women for their lack of enthusiasm because, as 1848 French writer Auguste Debay surmised, “Men like to have their happiness shared.”

Second-century Greek philosopher Galen believed that the movement of the womb throughout the body caused hysteria, and that coaxing the uterus back into the normal pelvic position would inspire the expulsion of fluids and the vexing hysteria would subside. During the Elizabethan age, doctors believed vigorous horseback riding cured the illness. In the Victorian era, although it took time and precision, manual manipulation by physicians and midwifes induced a “paroxysm” (i.e., an orgasm), in an effort to alleviate the affliction. Along with the dawn of the electric age, came the electromechanical vibrator to sooth the female syndrome that Freud characterized as “frigidity.” As with all high functioning industrial machines, it increased efficiency and required little skill to operate. And while the device primarily served the physical (and sensual), needs of women, discovery of the syndrome, the invention of the instrument, and even the marketing for it was created by and geared towards men and lacked any sexual connotation. Sears, Roebuck and Company’s 1918 Electrical Goods catalog encouraged husbands to purchase the appliance to restore their wives’ bright eyes and pink cheeks.

Vibrators’ appearance in 1920s pornographic films broke their wholesome, asexual image and solidified the connection between clinical orgasms and sex. With this taboo identification, the general public no longer associated vibrators with healthcare but rather with amoral sexual pleasure. Not until the 1970s, with the embracement of free love and the continuance of the women’s movement, did vibrators reemerge in the popular American zeitgeist. For instance, in 1977, sex therapist Dr. Joani Blank opened San Francisco’s Good Vibrations, a shop that actively serves female constituents and houses the largest collection of vibrators in the country. With women as designers, marketers and consumers, vibrators became part of the contemporary urban landscape as tokens of pleasure, health, and free sexual expression. In concurrence with this movement, Dr. Annie Sprinkle (former porn star, current performance artist and professor), writes, “Our sexuality is not only something that can be used for the enhancement of an intimate relationship, for physical pleasure, or procreation; it can also be used for personal transformation, physical and emotional healing, self-realization, spiritual growth, and as a way to learn about life and death.” With In the Next Room or the vibrator play, Sarah Ruhl examines the Victorian era’s foreplay: the first stirrings of women’s rights.