In Her Words: Elliot, A Soldier’s Fugue Ten Years Later 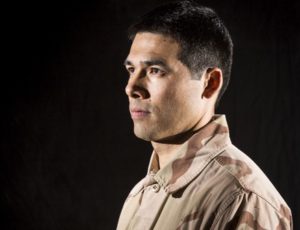 Anthony Lam as Elliot in Elliot, A Soldier’s Fugue at Profile Theatre 2017. Photo by David Kinder

It’s over ten years since Elliot, A Soldier’s Fugue premiered in New York. It’s almost fourteen years since my real-life cousin Elliot crossed the border north into Iraq from Kuwait. He was among the first marines to enter the conflict, and they were learning as they went. They were the real-life guinea pigs in a very real war. The medical response teams were unsure what the nature of the injuries would be, and therefore had to improvise treatment–there was much trial and error in those early years. One of the surprises was the amount of severe trauma that would be survived. My cousin described the scene in an evac hospital where there was row after row of guys in such extreme pain that the nurses practically threw pain meds at them. My cousin was one of those patients–and a fortunate one. He didn’t have to lose his leg after his severe injury, though many surgeries followed and his physical health remains compromised.

At that time–when he enlisted–it seemed to me that was the beginning. But there’s always a beginning before the beginning. I’ve been reflecting a lot since then on the war before the war. As a child of the 80s I came of age when AIDS was ravaging our Latino community in Philadelphia. Add to that the extreme toll the War on Drugs took on the same community. It left us decimated. Fathers, sons, brothers in jail–sentenced to decades for low-level possession, for the “crime” of addiction. Daughters, mothers, sisters left behind to the scrape up the pieces, to raise sons in this toxic environment where being a Latino was increasingly criminalized.

It seems to me our community’s youngsters fled this domestic war–the War on Drugs–determined not to be a victim of its fallout, determined to “escape” the vicious cycle of addiction, dealing, and criminalization. For many of them, higher education was not financially viable. So they enlisted–the military offered prestigious, respected, paying jobs.

It seems to me a complicated web. Young men of color escaping a domestic war, determined to rise above, and thereby enlisting in a foreign war to go fight abroad. And some of them, when they got hurt, became a new kind of addict–opioids to cure the war wounds.

These generational echoes continue to resonate for me. These echoes are why I wrote Elliot.